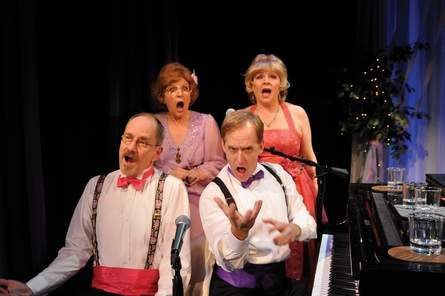 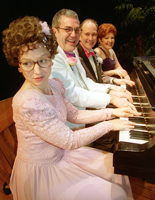 "A unique and special show that our subscribers flipped over it ... it had the audiences dancing in the aisles."
--- PASADENA PLAYHOUSE

Clive Barnes of the NEW YORK POST said Oil City Symphony's "a gusher! Better than John Philip Sousa played on massed kazoos with free ice-cream and bubble gum." VARIETY called it "an endearing slice of nostalgic Americana that few will resist." And the NEW YORK TIMES wrote "more than a tinge of moon madness, "Oil City Symphony" is its own refreshment. A musical with charm and a sure sense of its own identity." full review by Mel Gussow 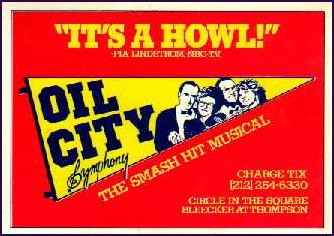 "In a pennant-festooned high school gymnasium in the imaginary Midwestern town of Oil City, four musicians who grandly call themselves the Oil City Symphony have come together for a reunion concert. There is Mark, the pianist and accordionist, with glasses and a white dinner jacket and purple slacks, who is also the minister of music at his church; Debbie, the drummer, an ex-prom queen in a strapless gown who exchanges one pink pump for a running shoe, the better to thump her bass drum: Mary the violinist, of stern Scandinavian stock, uptight, humorless, and "best remembered locally for her portrayal of Anita in West Side Story"; Mike, the gentle, wistful synthesizer player who found himself in the Summer of Love and once played with an acid rock band called Thursday's Grief. The Oil City Symphony is very funny indeed! Whether grimly trying to keep up with the quickening abandon of a mock Hungarian czardas, or haplessly seguing from Verdi's "Anvil Chorus" to Iron Butterfly's "In-a-Gadda-Da-Vida" or just getting down and funky with a little tune of their own called "Beaver Ball at the Bug Club" the Oil City Symphony lets the good times roll and in the process skewers every high school music program in the country... but fondly!".....................................................Michael Walsh, TIME Magazine -- full article 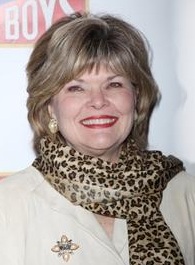 Debra Monk (pictured at right), Richard H. Blake, and many others starred in "If It Only Even Runs A Minute" -- a series about rare songs and behind-the-scenes tales from New York musicals that may not have been fully appreciated the first time around. The June 17th concert at Le Poisson Rouge, featured songs and stories from A Man of No Importance, The Gay Life, Molly, Musical Chairs, Oil City Symphony, Parade, The Prince of Central Park, They're Playing Our Song, and Violet!

Deb sang "Ohio Afternoon", a song she wrote with Mark Hardwick and I, from OIL CITY SYMPHONY, which incidentally ran for more than a minute. In fact it ran for a year and a half!

Here's a YouTube clip of Deb's part.. She reminisces about S.M.U., and Mark, "Cloggers for Christ" & Pumpboys, and then sits down at the drums to accompany herself on the song.

Also, see Debbie in MOZART IN THE JUNGLE

I AM OUT OF STOCK -- SORRY! TRY SEARCHING FOR IT ON AMAZON! With Debra Monk, Mark Hardwick, Mary Murfitt and Mike Craver. SONGS INCLUDE: COUNT YOUR BLESSINGS, CZARDAS, ANVIL CHORUS, IN-A-GADDA-DA-VIDA, OHIO AFTERNOON, BABY IT'S COLD OUTSIDE, THE HOKEY POKEY, BEAVER BALL AT THE BUG CLUB, BEEHIVE POLKA, A PATRIOTIC FANTASY, DIZZY FINGERS, GETTING ACQUAINTED, IRIS, THE END OF THE WORLD, DEAR MISS REEVES, COAXING THE PIANO, BUS RIDE, IN THE SWEET BYE AND BYE, MY OL' KENTUCKY ROCK AND ROLL HOME, AND EXODUS, plus SLEIGH RIDE, THE CHRISTMAS MEDLEY, and THE SUMMER MEDLEY.