I'll be joining Clyde Edgerton and his Rank Strangers band (Jack King and Matt Kendrick) -- at the UNC-G Friends of the Library dinner, in UNCG's Elliott University Center (Cone Ballroom) in Greensboro, March 3rd. I'll be doing "How Can You Tell 'Em They Can't Drive No More" which is a song from the musical adaptation Clyde and I are doing of his novel LUNCH AT THE PICCADILLY. for more information about this event

Grammys, Schmammys... Jim Watson and I are the official recipients of a "GAYNOR" -- the awards given by KAUR-FM's "FolkWaves" host Gaynor Johnson, in Sioux Falls, South Dakota. Our "MEETING IN THE AIR - SONGS OF THE CARTER FAMILY" was recently presented with a 2004 "Gaynor" award for best re-issue of a folk recording!

O.K., I know this is a mostly professional web site but I have to say a few words about my calico cat Butterfly, may she rest in peace. She was a great pal and a great companion, and the Lares/Penates/Vesta of my home and household. (She is pictured at right, zoomed out & coming around the lane.)

I inherited Butterfly from my mom, and had to take her with me after my mom's death. Being a outdoor country cat, Butterfly had no alternative other than becoming an inside urban dweller, due to my traveling schedule at least half of the year. We spent that first spring at the Mayflower Hotel in Louisville, while I worked at the Actors Theatre. She adjusted immediately, even to the big FedEx cargo jets that roared over the rooftop at all hours. The summer after Louisville we drove all the way to western Kansas, and set up residence at the old Cimarron Hotel (c1898) while I worked at the Boot Hill Rep, in Dodge City. All fall Butterfly had the run of the third floor. I'm sure she kept the more malevolent Old West ghosts and all the second floor cats at bay. In between stints in central Pennsylvania and eastern Maryland we lived one fall in Milwaukee while I worked at the Rep. During the summer of 2003 I took part in the Contemporary Theatre Festival in Shepardstown, WVA. We took up residence in a college dorm suite complete with purple Jesus stains on the carpet. Butterfly grew fond of nightly "deer-running" in the thick forest surrounding the campus. I however did not grow fond of re-searching her with a flashlight. Then this past fall we drove all the way to the wilds of Minnesota and lived in the Chanhassen Inn for three months while I did "Oil City" there.

Over the years, Butterfly became a seasoned traveler and liked riding up on the dash. At first she would cower between the glass and the board and yowl at every 16 wheeler that roared passed. Soon however, she just sat there and stared them down. I was about to get her a CB radio. (My vet told me that tricolored cats like Butterfly come with an "attitude".) Although she liked to walk on the piano keys in my studio, and occassionally add background vocals, she never was much of a fan of music, particularly the old time variety. I believe she took issue with fiddles. If you think about it, plus all that stuff about guts... what sensible cat wouldn't? Once while I was doing a live broadcast at WETS-FM in Johnson City, she managed to spring herself out of the Pet-Taxi and disappear. After an exhaustive in-studio search, the engineer (a self-described cat person) finally located her in a dark remote spot deep in the cable-bowels under the control board.

This winter, in her 17th year, she contracted some kind of neurological/nasopharyngeal demon and it took her life on Feb. 10th. Butterfly and Arthur Miller in the same day. But she was one good and sweet little cat and will be sorely sorely missed. If I thought it would do any good I'd wear black for six months and proclaim my grief from the mountain-top, but there will never be another "Miss B".

My favorite new quote on art and politics, precipitated by Michael Medved's criticism of Clint Eastwood's film MILLION DOLLAR BABY being nominated for an Oscar: "Politics - not art - is about finding consensus with the majority of the audience. Art is not about avoiding controversy or ensuring that everyone leaves feeling morally uplifted. What I love about movies and plays is seeing fictional characters behaving in ends-justify-the-means ways I never would. What I hate about politics is seeing real officials behaving in ends-justify-the-means ways on the W.M.D. "crisis" in Iraq, the Social Security "crisis," and the spread of federal disinformation from paid "journalists. Now that's worth howling about." ----Maureen Dowd

Old pal Richard "Dick "Zaffron died on December 19, 2004. Dick was a brilliant musician, philosopher and academician. He was part of the Cambridge MA folk scene in the early sixties, in fact it is rumoured that he gave Joan Baez guitar lessons! In addition to being a long-time philsophy professor at the University of North Carolina at Chapel Hill, Dick was also a part of the early Hollow Rock music parties that Tommy Thompson and those other guys were having way back when. I remember seeing and hearing Dick perform a riveting version of "Goddamn Your Eyes" at one of those soirees. It was a moment I've never forgotten. Dick was also a member of the musico/theatrical band the Nicotones and Natal Throes (along with Marcia Wilson, Rick Simpson, Doug Hill, Rita Golomb and myself). Our performances at the Cat's Cradle (when it was on West Rosemary Street) were somewhat legendary. We did all kinds of things, from Julie London covers and "The Donkey Serenade" to an entire Chekhov one act, and a Cliff notes version of the H.M.S. Pinafore. To hear Marcia and Dick sing their duet of "Heart of My Heart" - she in French and he in German -- was a funny and sweet and supreme pleasure. >>>Dick in the Cats Cradle cl974>>>

A memorial service for Dick was held February 20, at the ArtsCenter in Carrboro. The event was organized by Dick's son Alex Zaffron. First up there was classical guitarist Ed Stephenson, who played "Recuerdas de Alambra" and other selections. Then there were remembrances, including those of Jay Rosenberg of the UNC-CH Dept. of Philosophy; also remembrances by Dick's wife, Nancy, his brother Barney, and Dick's sons Alex and Peter (who now lives in Seattle). After that Bill and Libby Hicks and I played some tunes on fiddle, guitar and piano. Then two selections were played from a l974 recording (done at the old Cat's Cradle on W. Rosemary Street) of the NICOTONES, featuring Dick singing "On the Road to Mandalay" and "Heart of My Hearts" a duet between Marcia Wilson and Dick, Marcia singing in French, a la Edith Piaf, and Dick in German, a la as only Dick could do. There was wine and refreshments in the lobby and friends and family lingered 'til all hours. Obit in N&O, 1/12/05.

And 3 RCRs (Jack Herrick, Clay Buckner, and Chris Frank) were recently in New York, treading the boards at the John Houseman Theatre in Lone Star Love, which has indeed been a labor of love for old friend John Haber. Also, my old pal Emily Mikesell from Radio Gals and Oil City Symphony (and newly married to Michael Patterson, as a matter of fact) played fiddle in the show, which also contained some songs written by Tommy Thompson. Speaking of Tommy, please check out these tribute pages for him at "Tommy"

And speaking of Oil City Symphony -- it was definitely an Oil City fall. I've got oil coming out my ears, having just finished up a short run of the show at the Flat Rock Playhouse, in Flat Rock, NC. Bill Moss, an ex-Chapel Hillian, has written a nice profile in the Hendersonville Times-News called "An Old-Time Reunion".

Before Flat Rock, I did 11 weeks of OIL CITY at the Chanhassen Theatres, in Minnesota, right outside of the Twin Cities. Mary Murfitt directed the show at Chanhassen and reprised her role for a week, then Kathy Beaver came in and took over. I played myself, if one can say such a thing. Molly Wassermann played the drums and did the Debbie thing. Playing the piano in the Mark role was Shawn Stengel. Shawn is a native Minnesotoan, so we got to tag along on his visits to his family and relatives up in Brainerd, which was tons of fun and full of local color. Shawn took tons of pictures and here's some of his work. Above is a picture of a really big walleye we met along the way.

Working in the Chanhassen was kind of like being a part of the College of Musical Theatre Knowledge. It's a great gang of folks there. Tom Scallen is the owner/producer and Michael Brindisi is the Artistic Director. Oil City Symphony continues, with David Lohmnan in the Mark role and Richard Long in the Mike role, until the 23rd of January, 2005. Below are pictures of me and Shawn and Kathy and Molly in our limo going to do a tv spot at KARE-TV in Golden Valley. Good thing the theatre paid for this one. If left to our own devices it probably would have been a covered wagon. (Keep on scrolling for more shocking photographic mementos.)

there's nothing in these glasses

but there's something in those bottles 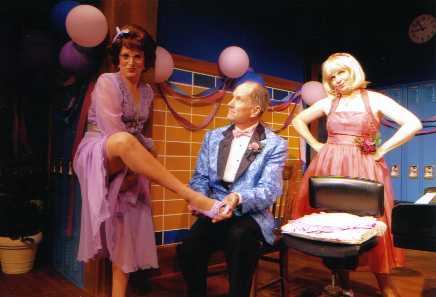 Mary asked me to help her with her shoe


We did dozens of radio interviews to promote the show in Minnesota, all the way from International Falls to Albert Lea, all the way from Fergus Falls to Red Wing. We were even thrilled to meet famous writer Judith Guest (author of ORDINARY PEOPLE) at one show. Here's a pic of us doing a late show with host Dan Geiger at WCCO Radio in Minneapolis:

For more information about OIL CITY SYMPHONY I direct your attention to the OCS page. This has an upcoming and past production log, reviews, history, information about recordings, script, licensing, and also lots more photos.

ALL PHOTOS ABOVE ARE FROM THE CAMERA OF SHAWN STENGEL